Home About Us Marcia H.
Armstrong 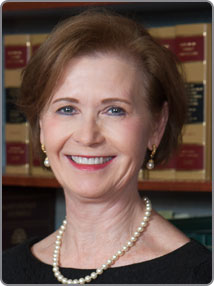 Marcia H. Armstrong is a well-known Eastern North Carolina Family Law Specialist, who has served as president of the state chapter of the American Academy of Matrimonial Lawyers (AAML). The AAML is recognized as the top family law association in the country. The AAML only accept members who demonstrate the highest levels of professional skill and ethics.

Marcia is a partner with her husband, L. Lamar Armstrong, Jr. at The Armstrong Law Firm, P.A., in Smithfield, North Carolina. She appears before trial courts throughout eastern North Carolina and currently concentrates her practice in the areas of equitable distribution and support issues. In addition to divorce litigation, Marcia is certified as an arbitrator by the American Academy of Matrimonial Lawyers and as a Superior Court and Family Financial Mediator by the North Carolina Dispute Resolution Commission. She has served as an arbitrator and mediator in many domestic cases.

Marcia was admitted to practice in North Carolina in 1983, after receiving her bachelor’s degree in 1980 from Salem College and her J.D. degree from Wake Forest University in 1983. She has also served as an adjunct professor of law for the University of North Carolina at Chapel Hill School of Law.

At The Armstrong Law Firm, P.A., Marcia handles every aspect of her family law cases involving complex property division and divorce in North Carolina. She guides her clients through difficult times with compassion and dedication.