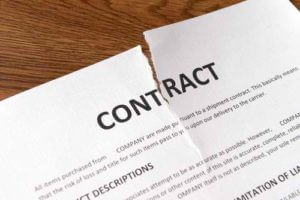 Contracts represent a cornerstone of commercial interactions. Although business relationships are built on trust, that trust is formalized and protected by the terms of a contract – an agreement, usually written, that sets out each party’s responsibilities and what they will receive when they fulfill those responsibilities (the consideration).

Thousands of contracts are made throughout North Carolina every day, and most of them are honored. When a contract is broken or breached, however, the results can be damaging to both parties.

If you’re dealing with a breach of contract, you need someone on your side with the practical experience and legal knowledge to be Strong for You. The Eastern North Carolina business dispute attorneys at The Armstrong Law Firm, P.A. can stand up for your legal rights in a contract dispute.

What is a Breach of Contract?

A breach of contract occurs when one party fails to live up to any of its promises as stated in a contract, or interferes with the other party’s ability to fulfill its promises under the contract, without legal justification for the failure or interference. A breach of contract case may also be based on a failure to meet industry standards or to meet the requirements of any express or implied warranties on a product or service.

In order to determine whether a breach of contract occurs, an experienced business dispute attorney will often review a situation with the following questions in mind:

What is a Material Breach?

In some business dispute cases, a material breach results in a complete failure of the non-breaching party to receive anything they were promised under the contract – for instance, if the breaching party promised to ship 500 golf balls, but never made the shipment at all.

A breach that is not “material” may be considered “minor.” A minor breach is one that does not prohibit the other party from receiving the consideration they were promised by the contract. For instance, in a contract for the sale and purchase of golf balls, if the breaching party agreed to ship 500 golf balls in cardboard boxes but instead shipped them in wooden boxes, the breach would likely be considered minor, unless the contract specified that the cardboard boxes were essential to the transaction.

The difference between a material breach and a minor breach often depends on the context of the contract itself. Contracts must clearly state which terms of the transaction they cover are essential and which are not. Your attorney can help you sort through the details of the contract to ensure that all material terms are clearly marked.

Legal Remedies for a Breach of Contract

If one party is threatening to breach a contract but has not actually done so, your attorneys can work to pursue an injunction that will prohibit the other party from breaching the contract under pain of legal penalties. If the breach has already occurred, your attorneys can help you determine which legal remedies are best suited to your needs.

Common legal remedies in breach of contract cases include:

Our Attorneys Are Ready to Be Strong for You

At The Armstrong Law Firm, P.C., our attorneys combine a small-town law firm feel with the practical experience and legal knowledge we need to be Strong for You. Contact us today to learn more about how we can help you and your business resolve a contract dispute or any business disputes.